Peter Josephson’s A Tempest Prayer is a solo show using the text of William Shakespeare’s The Tempest. Themes from the original text which depict the wielding of power and attempts at forgiveness will be in conversation with the events of 2020 as Peter examines what it means to be a white male in America today.

To escape confinement on his island, Prospero must forgive the brother who betrayed him, free the ones he used as slaves, and acknowledge his own darkness and weakness. Told through text, movement, and music, this piece delves into a classic text as a source for new performance.

A Tempest Prayer will be performed live, and streamed online. In accordance with State of New Hampshire guidelines a limited audience capacity will be able to watch the performance live at our blackbox theatre. Audiences can also enjoy this powerful piece of theatre from the comfort of their own home through our live streaming platform. 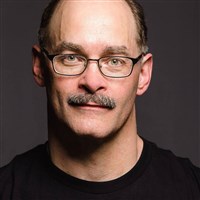 A Tempest Prayer is presented as part of SoloStage. Company Artist Peter Josephson is a fifteen-time New Hampshire Theatre Award nominee and two-time winner of the NHTA’s best actor award; he has been nominated for Seacoast Spotlight awards for both his acting and his directing. Peter has been leading workshops in the Michael Chekhov acting technique since 2013. He is familiar to Seacoast audiences for roles at the New Hampshire Theatre Project (including Seascape, Lysistrata, Amadeus, Twelfth Night, White Rabbit/Red Rabbit, and It’s a Wonderful Life), Theatre Unmasked (Oleanna), ACTONE (Tragedy: A Tragedy) and Seven Stages Shakespeare (Much Ado About Nothing, What You Will or Twelfth Night).
SoloStage will support three artists for six months as they develop new performances through a series of workshops, open rehearsals and work-in-progress performances. The program includes Company Artists Peter Josephson and Stephanie Lazenby, as well as a performer new to New Hampshire Theatre Project, Gemma Soldati.